A Degree Of Pedal Power

It seemed simple. Design a custom human powered Slot Car Track for Degree Anti-Perspirant Motionsense® and Slot Mods Raceways. But pedaling a series of bicycles with generators became an urgent and taxing challenge. It wasn’t just the quick build time of a few weeks, but the fact that there are no off the shelf pedal-power controllers available. This would require a custom solution provided by the U.S. Renewable Energy Association and it’s President, Gerald Zack.

Degree Anti-Perspirant Motionsense® was a participant of an outdoor exhibition in Montreal Canada, which was part of the Montreal GrandPrix-2018. The idea was to have a custom slot car track that was powered via “sweat equity” from passers-by in the Degree booth to promote the new AntiPerspirant in the spirit of the World Class Auto Race. 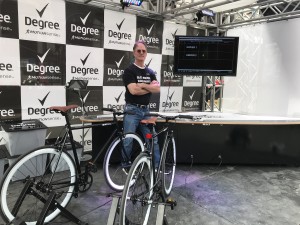 “Providing a variable power source is not necessarily a problem, but doing it on a very limited budget and having two independent generators was a bit tricky. We had to vary the voltage to each section of track independently and provide all power to the track via pedal power from stationary bikes. The power had to go from 0 volts to about 9 volts maximum to make the process reflect the effort by the people pedaling the bikes. Ad to that, we didn’t have the bikes that would be used, and we didn’t even know the tire or frame size until we arrived in Montreal.”  This was important because the larger the tire size the more it turns the generator per revolution.

The generators were rated at 0-12 volts, however, my testing showed they could actually achieve more than 24 volts. So if a person pedaled a bike aggressively, the car would fly off the track and destroy itself. The requirement was to make the cars go faster or slower by how fast or slow each bike was pedaled. We developed a simple voltage divider circuit that would drop off the excess voltage from each generator and yet keep the voltage proportional to the speed a person was pedaling.

The final result: The track went together and testing was done right up to the time of delivery. It was well received by the public and Degree Antiperspirant had a big hit with lots of activity and booth traffic.

It was a fun project to be involved with and is one of many slot car tracks the U.S. Renewable Energy Association has helped construct, including Mercedes Benz AMG, Formula 1, Quadrophenia track, Thermal Club and others.

About the Author: Gerry Zack