A small portable nuclear reactor about the size of a phone booth could be the key to securing America’s energy future. The Hyperion nuclear battery is filled with an uranium hydride core and surrounded by a hydrogen atmosphere. The self sufficient nuclear generator is simply buried underground and hooked up to a steam turbine it generates enough electricity to power a 25,000-home community for at least five years. 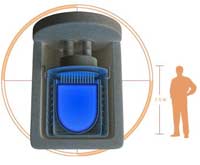 The nuclear battery cannot overheat and has no mechanical function to maintain. The company is expecting to produce 4000 units in the next 3 years, which could provide 100GW of power, equal to about 20% of America’s total energy usage.

Each mini reactor can produce 27 megawatts worth of thermal energy and it is totally self-contained, involves no moving parts and, therefore, doesn’t require a human operator.

“In fact, we prefer to call it a ‘drive’ or a ‘battery’ or a ‘module’ in that it’s so safe,” Hyperion spokeswoman Deborah Blackwell says. “Like you don’t open a double-A battery, you just plug

[the reactor] in and it does its chemical thing inside of it. You don’t ever open it or mess with it.”  Read More