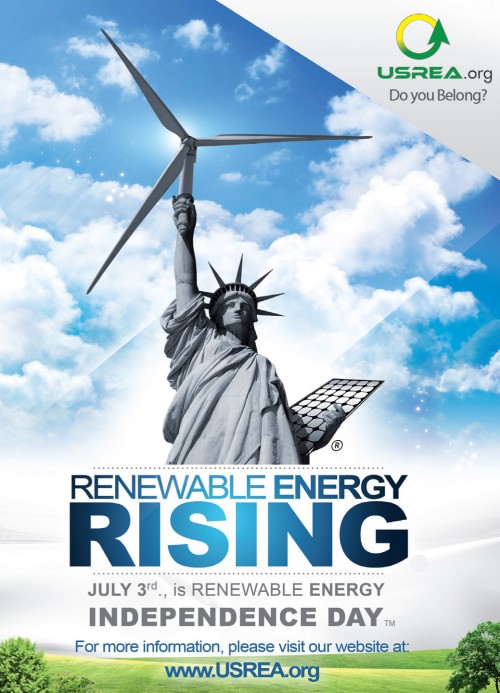 The current national percentage of Renewable Energy Electric use in 2015 (Approx 13.44%), represents a current Renewable Energy Day of February 18 (if a one year supply of renewable energy were used exclusively beginning January 1st, it would last until Feb. 18). The goal of the United States Renewable Energy Association, along with supporting companies and like minded individuals, is to have a goal declaring July 3rd as the nationally recognized tipping point goal in clean energy production. It is structured somewhat like Tax Freedom Day. July 3rd is 50.4% of a full year.

United States
In the United States, Renewable Energy Day for 2015 is February 18, for a total average effective use rate of 13.44 percent of the nation’s electric energy use. 2015 is the most current published data from the U.S. Energy Information Administration.

Purpose
According to Gerald B. Zack, President/CEO, USREA, “The purpose of Renewable Energy Independence Day is to provide U.S. citizens a metric with which to estimate progress in the use and deployment of Renewable Energy Technologies. The premise is that by comparing the relative energy use in a date reference, progress toward the tipping point of July 3rd can more easily be assessed.“

The actual language submitted to the U.S. House of Representatives and U.S. Senate is as follows:

It is our position that energy independence is critical for our national security, future job growth, and national sustainability. July 3rd marks a clearly definable target that is inclusive of the entire clean technology sector. February 18th is representative of 13.44% of the calendar year, or the amount of electric power from renewable energy in the USA in 2015. The Congressional Declaration will provide a metric that provides flexibility throughout the industry to find the best overall solutions to meet our increasing energy demands with clean alternatives in mind.